it looks like there is no native support for this kind of complex chart, initially I tried ggplot2 in R visual however I couldnt' get the ideal solution. finally it appears that this can be done much easier using python pandas + matplotlib.

sample code as below: 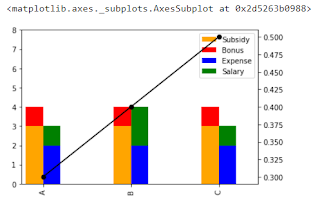 Posted by George Wen at 9:05 PM No comments: Links to this post

during the final stage of the upgrade on the sqlenginedbstartconfigaction_upgrade_configrc_cpu64  screen, the installation process appears to stuck, no error message no progreess so far.

however by looking into ERROLOG, it shows the sql process is busy upgrading databases etc, leave the process running for about 30 minutes and it finishes successfully.

it is bit confusing though since there is absolutely nothing else indicatign the progress is not stuck... even the errorlog only get updates after a few minutes.
Posted by George Wen at 7:39 PM No comments: Links to this post

After I figured out the MSDTC issue, all seemed well until I got hit by the MSMQ problem, even though I have diverted the queue to be on a remote machine, E4SE refused to work until it is satisfied that MSMQ is installed on the container, it turned out that MSMQ support in Container is only possible after build 1803 which isn't supported under Windows Server 2016.

Since I havne't got a 2019 server box on hand, I opted to use my windows 10 machine and pulled the 1803 image and rebuilt everything, good news is after all these the MSMQ issue is also gone.
will do more testing later but hopefully there should be no more major issues.
Posted by George Wen at 5:38 PM No comments: Links to this post

In my previous post, I almost thought everything is working fine until I got hit by this infamous MSDTC problem, I came across a few posts online and although they are quite inspiring and some of them have got it working, they are not quite the same situation as I got.

here is a summary of what people have got working for MSDTC:
> both app and sql are containerised
> under AWS, using ELB and port mapping
> under Azure, using CNI

what I want to achieve:

For me, my window server 2016 container host is running under vmware, initially I want to use the transparent network to make things easier however enabling promiscuous mode on the vmware environment doesn't seem to be an option so  this is out, at the end I ended up with running container just in NAT network and expose custom port to host.

It turns out that the above mentioned AWS scenario is the closest to mine, what I ended up with is to use KEMP load balancer in the place of ELB,

what is really important:

the above scenario only involves one container instance, if we need run multiple replica then we will most likely need to multiple the setup but I assume it is all straight forward and no drama here.

Posted by George Wen at 11:55 PM No comments: Links to this post

These days machine learning is an inescapable part of the realm if you are working in data field, as such I think it is necessary to learn something new and refresh what was taught at school over  a decade ago ... I took the coursea course "machine learning" by andrew ng  and finished the course today. I would recommend it to anyone who has interest to get to know a bit of machine learning , this course fall bit short on the theory and mathematics involved thought but that is understandable being an intro course.

Posted by George Wen at 12:50 AM No comments: Links to this post

A while back I was looking at containerising Epicor E4SE which is an asp.net application running on .net 2/4 framework, windows container wasn't mature enough and I had problem getting some basic stuff done at that time so I gave up.
With the initiative to move things to cloud, I once again take up this challenge and trying to sort this out this time.
so far I have got the following in place:

1. Only containerize the web front end, BPM workflow service will run on VM instead, the VM will also serve as batch processing server.
2. Within the containerized web app's web.config, setup the queue to be the  remote queue (MSMQ) hosted on the VM.
3. Site build need to be scripted using powershell script, this is not possible inside a container.
4. there was an issue installing crystal report runtime in container but google gave me the answer.
5. SQLXML is required for installing ICE 1.5
6. ICE won't install with IIS 10 (This Setup Requires Internet Information Server 5.1 or higher), the trick is to  manually update registry value and revert back after the installation.
7. Use PIDKEY parameter with ICE msi to install in silent mode.
8. I had problem with ICE EP1 EP2 installation in silent mode sine the msi installation has a custom action that requires user response, I tried to crack it using installation argument but eventually gave up and manually install the new version of assembly instead and use assembly binding redirect to resolve the error caused by multiple version of same assembly.
9. use gMSA  (Group managed service account) with container to support windows authentication and accessing domain protected resource from within the container.


I dont' think containerize the crystal report server is such a good idea so will leave it running in VM too, at the end all the web front end can be containerized, BPM and Report Server will still need their own VM but I reckon this is good enough for now.


There is still a major hurdle before this whole thing can work, this time it is the msdtc that plays up, since I am using a VM for SQL , to make msdtc work it will requires tweaking quite a few things, hope this is not a show stopper.

4/6: figured out that since I am running the container host in vmware environment, need to turn on the Promiscuous mode on the vSwitch, I doubt it will happen, might have to consider azure vm where cni will go into play.
Posted by George Wen at 5:53 PM No comments: Links to this post

Posted by George Wen at 4:25 PM No comments: Links to this post